We had some technical difficulties so go ahead and skip to about 3:30 to get to the start of the interview.  And despite claims to the contrary, I am not Canek Aguirre.  🙂

We live in a city with a mix of historic, urban, and suburban homes with some greenspaces that need protection.  Unfortunately, our city seems more focused on getting and spending grant money then on the preservation of our environment.

Our city is facing multiple problems due at least in part to climate change.  We should be working together to reduce our carbon footprint to help address this emergency.

As a former professor and someone who was in school for a very, very, very long time — education is important to me.  So important that I took the time to teach both of my children how to read, write, and do arithmetic before they started kindergarten.  Many morning sessions at the coffee shop and evenings at the kitchen table… and many great memories!

Why would I invest so much time and effort into something they’d get in a year or two anyway?

There’s a strong perception out there that what you can’t see doesn’t exist.  For learning, this manifests as what you can’t measure doesn’t exist.  The belief is that you shouldn’t teach someone until they’re “ready” to learn it.  What I learned studying Computational Neuroscience and other research tells a slightly different story.

While it’s true that children go through developmental stages which define certain concepts that they’re able to grasp, the brain is ALWAYS learning.  Think of it like a hand pump.  When you first start cranking the handle, you may not see evidence that anything is happening.  But as you pump water is moving up the column until eventually you can “see” the fruit of your labor as water finally comes out of the pump.  In much the same way, exposing children to ideas and information primes the pump.  When they are developmentally ready, you see the effect of that priming in terms of increased capacity to learn and abilities shown on assessments.

That’s why Universal Pre-K is so important.  Getting children into an enriching environment where they’re being exposed to books, numbers, and other activities designed to prime their little minds has an outsized effect on their lifetime outcomes and achievements.  If we want to close the achievement gap and increase diversity in leadership positions, we have to start doing so as early as possible.

Thankfully city council paused on the restoration plans of Taylor Run.  You may have noticed more signs for Chinquapin then for any council candidate.  It’s unclear why it took so long for the current council to take note and act, but I’m glad they did.

This is an example where our engaged and thoughtful residents, many with relevant professional expertise were able to note problems with a city plan and actually make a difference.  I’d like to see more engagement with our residents and get them involved at an earlier stage so that bad ideas are not only stopped, but don’t get so far to begin with.

Coverage of the debates in the Alex Times:

The city claimed that Seminary Road was part of Vision Zero – it’s plan to eliminate pedestrian deaths and serious injuries.  The city’s own data (see image below) shows that stretch of road to have already been free of danger.  Notably, a month after the changes to Seminary were made, another pedestrian was struck and killed on Duke St. blocks away.  This occurred on a stretch of Duke that the city’s data shows to actually be dangerous. 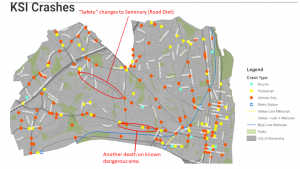 One resident I ran into while canvassing had the message that she wasn’t sure people knew they don’t have to vote for six candidates.  You may vote, in fact, for *up to* six candidates.  Why does this fact matter?

If you want change, you should vote only for the candidates you actually like.  Voting for others can hurt your favorites’ chances.  The best thing you can do this election is to only vote for those candidates you personally want.  If that doesn’t come to six, even if it’s only one or two, feel confident in stopping there and you will really help your favorites.

I’m the husband of one, and the father of two:   a first grader at MacArthur elementary and an eighth grader at George Washington middle school.   I’m originally from New Orleans and did the second half of my growing up in New Jersey.  I then lived in Ithaca, NY; Long Beach, CA; and most recently Boston, MA.  We moved to Alexandria so my wife (a climate scientist) could take her dream job at NASA HQ.

The most striking thing to me about Alexandria is it’s diversity.  Diversity of people–rich history mixed with fresh new faces from all over the world.  Diversity of neighborhoods–from the west end to Old Town, from central Alexandria to Potomac Yards.  Whether you’re looking for history, for an urban vibe, a town house or a single family home, we’ve got it.  Whatever stage of life you’re at, Alexandria has something beautiful to offer.

Professionally, I’ve been in science and technology my entire life.  Starting with a degree in Math from Cornell University, I went on to earn degrees in Computer Science and Computational Neuroscience.  I taught Computer Science for a while before moving on to industry where I’ve worked in defense, finance, startups, online retail, and online advertising.  Throughout, I’ve built strong teams and solved hard, challenging problems.  It’s what I love to do and why I’ve decided to run for city council.